Being in New York City never gets old, but just in case, on those rare occasions you’re looking to escape, it’s easy to find a nearby getaway destination. And all you need to do to get there is book a train ticket.

Train travel in the U.S. isn’t exactly as easy as, say European or Japanese train travel, but thankfully those living in New York City live in the epicenter of railway transportation in America. It’s a snap to get to and from destinations near and far on Amtrak, the MTA, and the Long Island Railroad. If you need a little inspiration on where you should go, here are nine places to travel via train that are worthy of taking the slow route.

Amtrak’s Lake Shore Limited offers daily departures to whisk New Yorkers away to the Windy City. The route takes passengers through some gorgeous upstate New York areas, then on to Lake Michigan before entering Chicago. According to Amtrak, the best seat in the house is the Viewliner accommodations, including the Viewliner Bedroom Suite, which comes with a foldout bed, ideal for the overnight journey. Once at your destination, it’s time to explore the best attractions in Chicago, like The Art Institute of Chicago, set out on a local architectural walking tour, and see The Bean, and stay at the luxe Pendry Chicago.

For a quicker getaway, board Amtrak’s Northeast Regional to Westerly, Rhode Island, a quiet little beach town ideal for a refreshing weekend. Though quick, the train passes through some idyllic landscapes in Connecticut, over bridges, past glittering water views, and pastoral fields. Once in Westerly, disembark the train and make your way to The Ocean House, arguably one of the most luxurious hotels in America. There, kick off your shoes in one of its 49 guest rooms that offer ocean views, enjoy its spa experiences, and walk right to the beach. If you do happen to leave the hotel, you’ll also be rewarded with an adorable small-town experience. Make your way downtown to shop in spots like the ​​Savoy Bookshop and Cafe, dine on local bites at The Cooked Goose, or just tuck your toes into the sand for a day at Misquamicut Beach.

NYC to Boston: 3 hours 43 minutes on Acela, 5 hours on Regional

Keep going north on the Northeast Regional for a few more stops, and you’ll hit Boston. This journey continues the stellar views through bucolic landscapes and a sprinkling of city views as you pass through Providence. This journey also offers a slow and fast version. For a quicker getaway (where the views zoom so fast you may miss them), choose the Acela option, which has fewer stops and faster speeds. But if you’ve got time, take the slower Regional train. Once in Boston, soak in a little history by walking The Freedom Trail and visiting the Paul Revere House, and grab a bit of culture at the Institute of Contemporary Art and The Museum of Fine Arts. And if you happen to be there during baseball season, absolutely do not miss a Red Sox game at Fenway. Boston is brimming with stellar hotels to choose from, but a perennial favorite is The Langham, Boston, a hotel built inside the old Federal Reserve Bank that’s centrally located in the city, making it a great home base for your stay.

If the allure of an ooey, gooey, downright delicious cheesesteak is calling your name, then it’s time to hop a quick train south to Philadelphia. Though the views during this ride won’t be the best, it’s worth it for where the train stops: William H. Gray III 30th Street Station. First opened in 1933, the station maintains much of its original charm, including towering ceilings (95 feet high to be exact) and art deco touches. It’s also home to “The Porch,” an outdoor area connecting the station to Market Street. The station is so spectacular it made its way to the National Register of Historic Places. It’s also a stone’s throw away from major attractions in the city, including The Academy of Natural Sciences and Independence Hall. As for that cheesesteak, it’s up for debate on who serves it best, so we’ll let Visit Philly settle this one by sharing its list of best cheesesteaks here. As for where to rest after you dine, check into Wm. Mulherin’s Sons Hotel, a chic and centrally located boutique hotel with timeless design, including exposed brick and beams.

Go just an absolute smidge past Philadelphia, and you’ll hit Wilmington, a small city that’s a history buff’s dream. Getting there takes the same route as the train to Philly, but by going a touch farther, you start to hit more verdant landscapes before entering the city of 70,000 people. In Wilmington, depart at ​​Joseph R. Biden Jr. Railroad Station, a railway stop named after President Biden thanks to his famed trips back and forth to Washington, D.C. on this very railway. Once you’re out, make your way to places like the Delaware Art Museum, Fort Christina, and Nemours Estate, a stunning 200-acre garden and 77-room mansion that will make you feel like you’re back in the Gilded Age. After seeing the local attractions, check into the Hotel Du Pont, a 12-story Italian Renaissance building that opened in 1913 smack dab in the middle of downtown.

Take your trip a few stops further and make your way to the nation’s capital, a journey that takes you through more cityscapes (including Philadelphia and Baltimore), with a smattering of green spaces in between. However, like Boston, this train too comes with a faster option on the Acela, cutting 40 minutes of travel time if you’re really in a rush. In D.C., historical and cultural sites abound, including The John F. Kennedy Center for the Performing Arts, the National Mall, the National Museum of African American History and Culture, and of course, tours of the White House. In D.C., keep the historical times going by booking a stay at The Watergate Hotel, which, yes, is the very one associated with the political scandal by the same name.

Need a big breath of fresh air? Hop aboard Amtrak’s Adirondacks line that travels from New York City all the way to Montreal. Don’t worry. You don’t need to go that far to find wide-open spaces. Just hop off in ​​Saratoga Springs. The journey is perhaps one of the most breathtaking on this list, winding travelers through pastures and New York towns like Rhinecliff and Hudson before coming to rest in the quaint rail station in Saratoga. In town, make your way to the Saratoga Spa State Park, a place so stunning it was named a National Historic Landmark. While there, see if there’s a show playing at the Saratoga Performing Arts Center, and explore a bit of its delightful downtown. Then, check into the Adelphi Hotel, a 32-room boutique hotel that underwent a major renovation in 2017, breathing new life into this historic spot.

Amtrak isn’t the only train game in town. New Yorkers can also board the Long Island Railroad to Montauk for a seaside break. The views outside this train quickly transform from high rises to small towns as you make your way through Long Island, taking a nearly straight shot down the coast until you hit the very tip of the island. Yes, Montauk has long been favored as a summer escape thanks to its idyllic beaches, but don’t skip over it for a fall or even winter escape for a crowd-free scene. In Montauk, go see the Montauk Point Lighthouse, walk along Ditch Plains Beach, and set out on a horseback ride with Deep Hollow Ranch, the first established cattle ranch in the U.S. Then, rest at Gurney’s Star Island, a hotel boasting a private beach, complimentary beach cruisers, and several delicious dining venues.

For an under an hour journey, hop aboard the Metro-North Railroad to the storied town of Sleepy Hollow. Embark at Grand Central and take the commuter rail, which snakes north through the city before popping out in greener pastures once you hit stops like Greystone. Sleepy Hollow is technically a village with just 10,000 permanent residents, only adding to its charms. If you’re there during spooky season, guests should pay a visit to the Sleepy Hollow Cemetery and see The Headless Horseman Bridge that traverses the Pocantico River. For something a little less spooky, visit Kykuit, the former estate of the Rockefellers. Book a few nights in the Castle Hotel and Spa, a one-time private residence turned into a dreamy 31-room accommodation.

This Overlooked Florida City Has a Burgeoning Riverwalk District, a Hip New Hotel, and an Amazing Cuban American Dining Scene 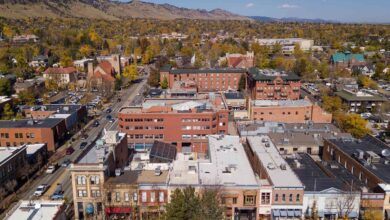 9 Best Places to Live in Colorado, According to Real Estate Experts

With Product You Purchase